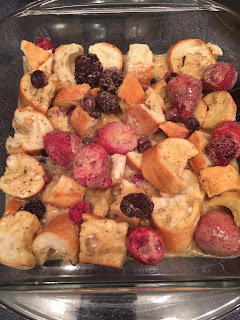 Over the holidays I bought a baguette for a dinner I was hosting and forgot to serve it. A couple days later I noticed the baguette hiding on top of the fridge...hard as a rock. Instead of throwing it out I made this delicious Berry Baked French Toast for breakfast.


This breakfast bake was easy to put together the night before. You want the bread to soak in the egg mixture over night. In the morning I put the casserole dish directly from the fridge into the cold oven. Turned the oven on and baked the French toast for 45 minutes. You don't want to put a cold glass pan into a hot oven because you risk cracking the pan. 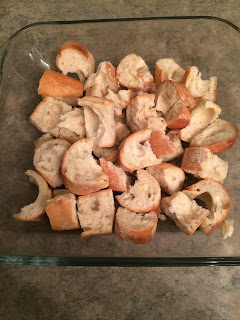 The original recipe uses 12 cups of cubed bread to serve 12 people. Since I only had 4 cups of bread I made a third of the recipe, which turned out really well! 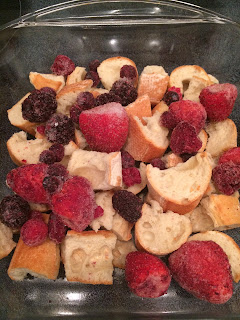