A Substitute for Sliced Deli Meats 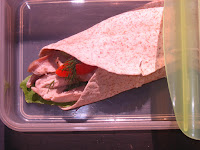 It's back to school time and that means packed lunches for the next 8 months. I'm off the hook for making and packing lunches because my kids have been in charge of this task for a few years. I still need to have items on hand for them to actually put a lunch together. Like most parents at the start of every school year, I'm determined to be organized and have lots of good things available for them so they can easily throw together a (mostly) healthy meal that will sustain them until they get home. This school year I'm going to make an effort to have less sliced deli meat in the fridge for wraps and sandwiches.


Notice I said 'less' deli meat not 'no' deli meat. My kids like meat sandwiches and wraps for lunches and sliced deli meat or prepackaged sliced meats are handy. They're also high in sodium and costly so for health and budget, I don't want them eating these meats daily. I'm going to make my own sliced meat for sandwiches by roasting different meats on Sundays (chicken, beef, turkey, pork...) and slicing them so they're ready for sandwiches a few days of the week. This week is turkey. 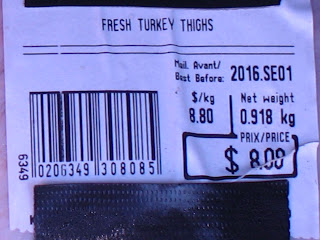 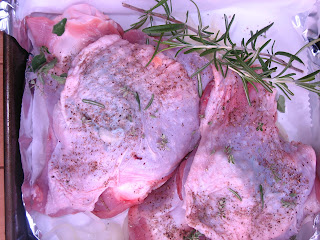 I roasted them in a parchment paper lined pan at 350 F until they reached 165 F (about 45 min. I think). I let them cool in the pan then removed the skin and bones. I prefer to cook them with bone-in and skin on because I find it keeps the meat moist. 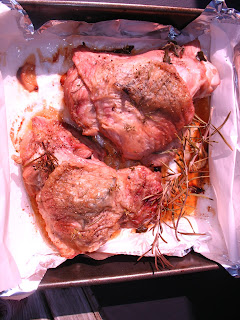 After the skin and bones were removed, I sliced the turkey and put it in a container in the fridge so it would be ready for sandwiches. 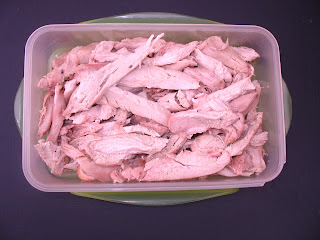 Once the skin and bones were removed, I estimate (based on information from various turkey sites) I had about 612 g of cooked turkey. Sixty grams of turkey is plenty of meat for one sandwich or wrap, so theoretically, there will be enough turkey for 10 sandwiches.Between the 2 kids and me making packed lunches, we'll get 2 turkey sandwiches each this week plus leftovers for after school or late night snacks. Some of the sliced turkey could be frozen, too. It doesn't taste as good as the fresh cooked turkey in a sandwich, but nothing a little mayo and dijon mustard can't fix.

In terms of cost, roasting the turkey thighs was worth the effort:  I paid $8.08 for 612 g cooked turkey for sandwiches. That same amount of sliced turkey from the deli would have cost $18.30.

It was also worth the effort in terms of nutrition. Among other nutrients, I look to meat as a source of protein, iron, zinc, and vitamin B12. I compared 60 g of roasted turkey thigh to 60 g of sliced turkey from the deli and found out that the roasted turkey thigh has 5 more grams of protein, over twice as much iron, three times the zinc, and 15% more B12.  And, get this, there's 17 times more sodium in the deli turkey: 684 mg vs 41 mg.

Beef is next on the list to make for sliced meat for sandwiches. I bought a small eye of round roast at 50% off and found a slow-cooker recipe to try. I'll let you know how it turns out!