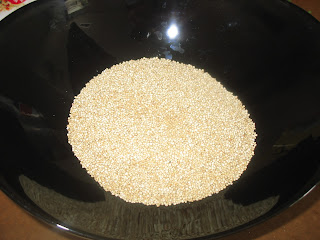 You’ve likely already heard it - whole grains are good for you. But, what the heck is a ‘whole grain’, and why should we eat them? I’m going to try and explain this and get you thinking beyond bread. Whole grains are a rich source of fibre, B-vitamins, Vitamin E, phytochemicals, several minerals and they contain some protein. Diets rich in whole grains are associated with reduced risk of heart disease, type 2 diabetes and certain types of cancer.  A whole grain has all three parts of the grain: the bran, endosperm and the germ. The bran and the germ have the bulk of the nutrition of the grain. Refined grains, on the other hand, like white flour and pasta, are made from the endosperm – the least nutritious portion of the grain. Sure, refined grains are enriched with vitamins and minerals (enriched means that some of the nutrients of the bran and germ are added back) but they’re still less nutritious than whole grains and have much less fibre.

But my kids will only eat white bread!


That may be so but there are lots of other ways to eat whole grains rather than switching to whole grain bread. Barley, quinoa, brown rice, and bulgur are just a few examples of whole grains. They can be served as a side dish, added to soup or as a base for a salad. And, oats, of course are a whole grain. Serve hot oatmeal or make oatmeal muffins.

I’ve been expanding our family’s ‘whole grain horizon’ and some of my successes include buckwheat pancakes, hot oatmeal and brown rice pudding. One that wasn’t so well received was a whole grain couscous and black bean salad. My youngest son fondly refers to it as ‘goose poop’ salad! Truth be told, he was the only one who didn’t like it.

Here’s a quinoa salad I tried and liked. I 'invented' this recipe by taking some ideas from a few quinoa salad recipes I looked up. I used roasted veggies simply b/c I was roasting a huge pan of veggies for dinner and I thought it would taste good with the quinoa. So, you don't have to roast the veggies and instead of sweet potato, you could add chopped tomato or cucumber or another vegetable you have on hand that could be eaten raw (broccoli, cauliflower or even frozen peas could be used)

What to do
Cook the quinoa. It's similar to cooking rice. Use twice as much water as quinoa. So, for 1 cup quinoa, bring 2 cups water to boil, stir the quinoa into the boiling water, reduce heat to simmer, cover and simmer for 15 min. After the 15 min, remove from heat and let sit for 5 min (keep the lid on). Fluff with a fork.
It looks like this (uncooked quinoa is the picture at the start of this post) 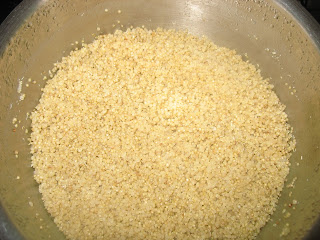 Get the vegetables, olives and feta cheese ready. 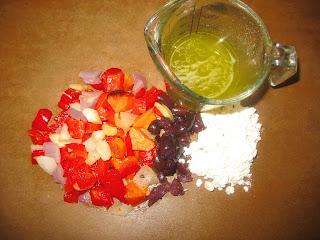 Add them to the quinoa 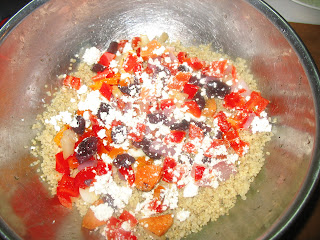 Pour the vinaigrette over everything and toss. I used about 3 tbsp of vinaigrette. Use just enough to have the dressing lightly coat the ingredients. 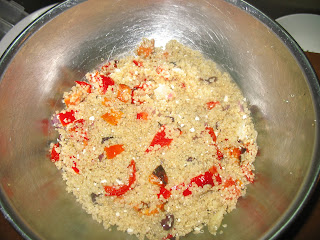 This will keep well for a few days in the fridge. Leftovers are great for a packed lunch. If I make this again with roasted veggies, I'm going to add some toasted sunflower seeds or almonds to give it some crunch. But, the next time I make this I'm going to use raw veggies.