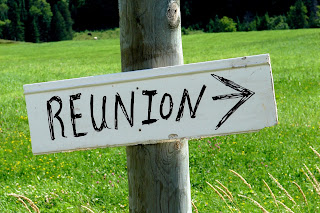 At the last family reunion picnic I went to, a disaster was averted, no thanks to my aunt.


Aunt Flora brought 30 chicken legs that she had thawed in the microwave right before her one hour drive to the conservation area. They arrived, WARM, in a big plastic container she carried in front of her like she was transporting the crown of Queen Elizabeth II on a velvet pillow.

Warm chicken, in a car, in the summer, for an hour? Trouble!  Bacteria can double their numbers every 20 minutes, so however many bacteria were on those chicken legs when she took them out of the freezer, now there were 8 times more. Aunt Flora wasn’t following a basic food safety rule: keep perishable foods cold (below 4 C) or hot (above 60 C) so bacteria won’t grow.

I can’t imagine telling my elders what to do (so I write about it in blogs instead-- talk about “chicken”!) but really she should’ve packed those chicken legs in a few small containers, and then put those on ice in a cooler. In fact, rather than thawing in the microwave (which is okay if you cook immediately or cool immediately) she could have saved a step by thawing in the fridge for a day or so. She could have put the still-cold chicken legs into a container then into a cooler with ice for the one hour drive to the picnic. The chicken would have had less of a bacterial “marinade”.

That no-one got sick is a testament to Granddad’s food handling skills at the BBQ. He prepares for these events with military cunning. He brings lots of tongs so that the same tongs never touch raw meat and cooked meat; uses lots of paper plates  for the same reason (“Why on Earth any fool would put cooked meat back onto a plate he just used for raw meat, is beyond my ken,” I’ve heard him say). 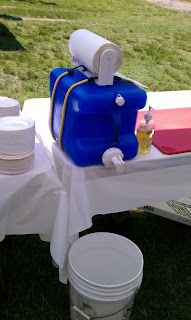 He brings a set-up for washing his hands: a camping water container with a tap, along with soap and paper towels. He doesn’t much go in for hand sanitizer when BBQing (“Washing hands gets rid of what needs to be got rid of”). And, he uses the meat thermometer we got him a few birthdays back: he checks that meat reaches at least 74 C (or 165 F, his preferred temperature scale) and that weekend, he was keeping the chicken on the grill ‘til it reached 180 F. 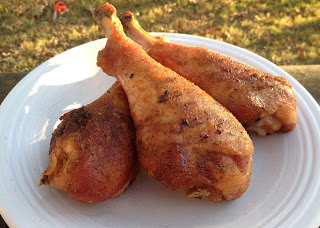 He wasn’t letting anyone touch their food until they too had washed their hands.
Good on you, Granddad!  You protected us from ourselves, from Aunt Flora and from the flora on her chicken.